What’s Artistic and Beautiful About Your Suburb? 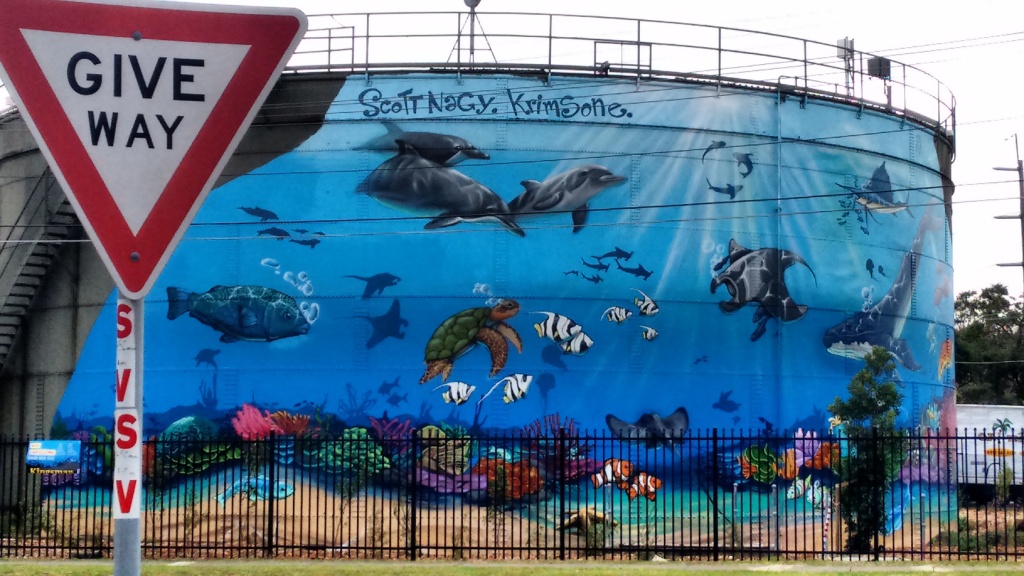 On a recent trip to Hornsby, on the upper north shore of Sydney, we snapped this picture of a large water tank that has recently been turned into an underwater oasis, but was once a drab eyesore that was really quite unsightly and took pride of place as you drove on to the very busy Galston Road. Now, though, as you drive through Hornsby, your mood is instantly transformed; things that once looked gloomy now make you feel happy and cheerful, and we can’t help but attribute some of that feeling to the brightly coloured and beautiful underwater seascape painted on the water tower that looms large over one of the major streets in the suburb.

Art and culture has always played a powerful role in our society that people too often overlook. But the arts have the power to uplift, to inspire, to heal, and to bring people together in ways that nothing else can. There is a reason why art classes are recommended to people as a form of therapy; why people run further and faster when they’re listening to music; and why the cinema became fastest growing recreational activity of the twentieth century.

The arts bring joy to people’s lives, and in neighbourhoods where residents’ artistic and creative pursuits are encouraged, there is a greater sense of community among those who live their. Research conducted in the UK, USA and Australia has also consistently shown that the arts can help create social and cultural bonds within a community, and is particularly effective at helping people to acknowledge different community identities and embrace diversity through participation in a common hobby.

But even for people who do not actively participate in the arts, murals, outdoor community art projects, and even organised events — art exhibitions, concerts, film festivals, etc — still play a crucial role in helping people to construct the world in which they live. Art can be beautiful, but it can also comment on issues that are important in our society. It’s often art that is instrumental in bringing about change.

The arts inspire people to take action and bring about change

Consider, for example, Billie Holiday’s ‘Strange Fruit’ from 1939, which became a symbol the anti-lynching movement and precipitated the civil rights movement in the US; or Aretha Franklin’s ‘Respect’, a song written by Otis Redding in 1965 that became an anthem for both the civil rights and women’s liberation movements of 60s and 70s after Franklin covered it in 1967; or the blistering critique of society in 1970s Britain, a country marred by a recession, unemployment, political unrest and racism (not dissimilar to the current unrest in Britain today, following Brexit) in the Sex Pistols’ ‘Anarchy in the UK’; or even the commentary on gender, race and social inequality that’s present in the music of contemporary artists like Beyoncé, Janet Jackson and Kendrick Lamar, all of whom have been responsible for reigniting the Black Lives Matter movement.

But political commentary isn’t confined to music. Visual art has just as long a history with politics and instigating change as music does. Picasso’s ‘Guernica’ is probably his most famous image, as well as his most political. It depicts the suffering of many of the civilians of Guernica in Spain, following the bombing by German and Italian warplanes at the request of the Spanish Nationalists, and it was this painting that helped bring worldwide attention to the Spanish Civil War, at a time when no one else seemed to care.

More recently, Shepard Fairey’s ‘Barack Obama Hope’ poster became a symbol of the 2008 presidential election that saw Obama receive the highest total number of votes for a presidential candidate in US history. While, on our shores, the ‘Casino Mike’ mural in Sydney’s Chippendale by artist Scott Marsh, is representative of the unrest and discontent currently felt in Sydney over Premier Mike Baird’s controversial Sydney lockout laws, which saw an unprecedented 1,800 public submissions to a government review of the lockout laws in April this year.

Art, culture and beauty are important to communities

Art and culture are important in our communities, not just for social and political reasons, but sometimes just because of beauty. As mentioned before, the beautiful mural on the water tower in Hornsby has the power to instantly transform a mood when driving through the suburb. Perhaps this is a feeling a great many residents share.

When people are looking for a new home, they look for homes in areas where they’ll feel happy living; indeed there are some homes and suburbs, where you just get a feel for the place. This has a lot to do with the home itself, sure, but it’s also the area. If it’s beautiful in some way, whether that’s due to a piece of street art, such as that water tower in Hornsby, the Casino Mike mural in Chippendale, or the graffiti wall in Bondi, or some other kind of natural beauty — the Jenolan Caves in the Blue Mountains, the Flinders Ranges in South Australia, a rockpool at your local beach.