Collaroy, the Sydney Storm and the Conveyancing Lesson for Buyers 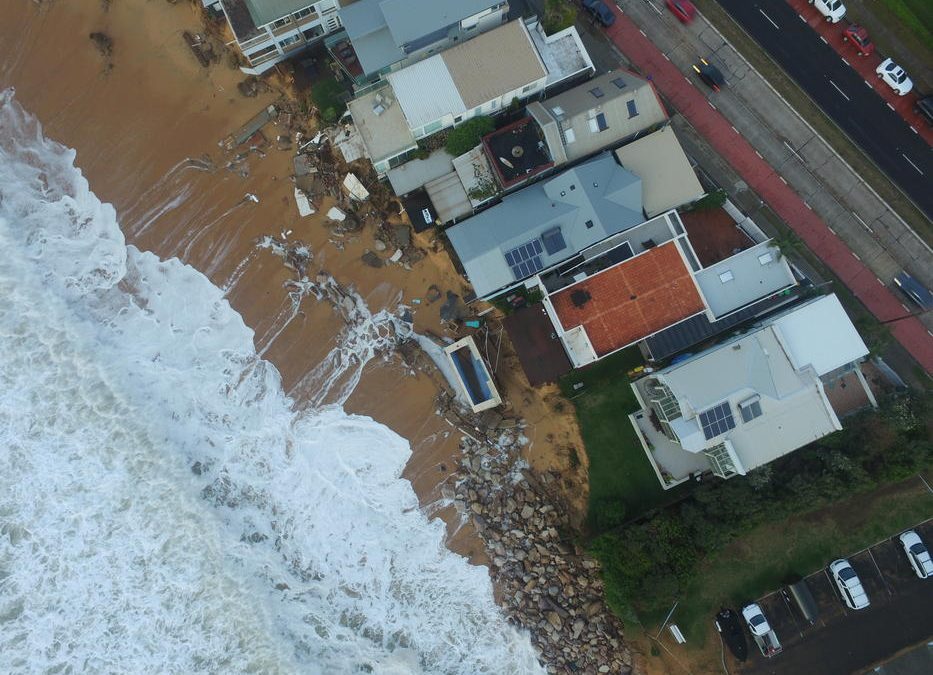 For three days in the month of June 2016, Collaroy, a beachside suburb on the northern beaches of Sydney, became the most famous beach in the country. A superstorm, which had travelled southwards from Queensland, wreaked havoc on the entire region, including greater Sydney, lashing the coastline, felling trees and causing flash flooding, but for 10 houses situated right on the beachfront of Collaroy, the storm was devastating. Dramatic images of houses that looked ready to collapse, their balconies dangling precariously over the ocean below, were beamed around the country, including the most dramatic of them all — that of an inground swimming pool which had been swept out of a backyard and onto the beach.

In the immediate aftermath, many residents were quick to lay blame on the local council for failing to notify them about any potential effects the sea could have on their homes. One resident said he was never even made aware that the property he bought in 2015 was at risk of being undermined by coastal erosion and vowed to sue to the council and the real estate agent who sold the property to him. But the controversy about who’s to blame for the damage to residential property at Collaroy, not only demonstrates ignorance on the part of the people who live there, but it also highlights a valuable lesson for all buyers, regardless of the property they’re buying: a conveyancer is a buyer’s most important ally.

Collaroy has a long history of coastal erosion

Collaroy and the neighbouring beach of Narrabeen are the third most vulnerable coastlines in Australia, due to coastal processes and erosion. Since the 1920s, there have been numerously well-documented cases of coastal erosion undermining properties situated on the Collaroy beachfront. The most recent occured in 1974, when several high rise apartments were undermined when a superstorm lashed the northern beaches coastline in the one of the most severe storms ever recorded in the region. Since then, coastal scientists and the local council have been monitoring the effects of erosion at Collaroy and Narrabeen beaches and, where necessary, the council has acquired homes it identified as being at serious risk from coastal erosion; most recently, in 2005, a property at 1146 Pittwater Road was acquired by the council for $2.97 million.

In 2007, the council listed 80 properties in Collaroy and Narrabeen as being within the wave impact zone and, therefore, at risk of erosion. It also tried twice to acquire another property in nearby Ocean Street, but the owners refused to sell. More recently, in 2014 the council adopted a new Coastal Zone Management Plan (CZMP), which stipulated that, while the council would do all it could to protect the coastlines of Collaroy and Narrabeen beaches, “property owners would be responsible for protecting their property from the impacts of coastal processes”, but would be able to apply to the council to have a sea wall built around their property, the cost of which being the homeowner’s responsibility.

The council reached out to the community regularly

The CZMP was more than 12 months in the making, and went through a period of significant community consultation before a draft plan was released in June 2014 and exhibited publicly. Following another three month period of community consultation, the final plan was released in October 2014. Consultation with the community involved sending 800 homeowners a summary document of the planned CZMP and inviting them to comment and participate in the development of the plan, while a further 5000 emails were sent to residents, also inviting them to participate in the development of the plan; advertisements outlining the proposed plan were also placed in the local newspaper. Three forums were also held, specifically for beachfront landowners and residents, which 70 owners and residents attended.

It’s absurd, then, for any homeowner to claim they weren’t aware, or that the council never made them aware, of the risks posed to their property by coastal erosion. As for whether the real estate agent should be held responsible for not disclosing the risks to prospective buyers, that’s equally contentious. In New South Wales, every homeowner selling their property must sign a contract of sale, containing a vendor’s disclosure statement, which must include copies of zoning certificates, sewage diagrams, land plans, and any other document relating to the land. Given the long and well-established risks to dwellings in the Collaroy-Narrabeen area, the zoning certificate would also contain notations, by the council, relating to any coastal hazards.

Pay close attention to zoning certificates and other documents

If the vendor failed to include the zoning certificate in their vendor’s disclosure statement (which would be highly unlikely, given it’s the main legal document that confirms zoning and applicable development of the property) the buyer’s conveyancer should have picked this up, and this would have been grounds for the buyer to cancel the sale if they were so inclined. Assuming this didn’t happen and the vendor did enclose the zoning certificate, then it’s more likely that the buyer either didn’t read it or didn’t fully understand the implications the coastal hazards could have on the dwelling structure — something that is all too common.

In today’s property market, it’s tempting for buyers to overlook seemingly innocuous items in a contract, such as potential coastal hazards, when there’s plenty of buyer interest in the property and they fear missing out. There is also the perception that homes in well-established suburbs, particularly a home valued at in excess of $2 million and which has plenty of buyer interest, can’t be in much danger of, say, the land being eroded away by the very sea it’s overlooking, because it wouldn’t have been bought and sold as many times as it has been in its hundred-plus year history. Meanwhile, other buyers believe, erroneously, that the real estate agent should verbally mention potential hazards or risks.

Research the market and hire an experienced conveyancer

But the real truth is: Caveat emptor — let the buyer beware. When you buy property, it’s up to you to do your due diligence and make sure you’ve reviewed the contract of sale and understand any potential risks that may have been outlined in the zoning certificate and other documents. In this case, even cursory research about coastal erosion at Collaroy would have turned up numerous sources of information about the long history of storm damage and erosion, including this document compiled by Warringah Council in 2008, which contains numerous images of similar damage to dwellings and instances of erosion that occurred in 1920, 1945, 1967, 1974, 1995 and 2007.

The lesson for all buyers, then, is to do your research and hire a conveyancer early, because they’re really your only ally when it comes to buying property. If there’s something in the vendor’s disclosure statement, no matter how unlikely it seems, that you think is worthy of further consideration, do look into it. If any of those residents had properly understood the implications in their zoning certificates — and the likelihood of such an event occurring again — they could have taken the necessary steps to protect their homes. Remember: Being forewarned is being forearmed.

You can learn more about the conveyancing process here. Alternatively, to be kept up-to-date with the latest property news, insights and analysis, continue to our blog.