Why Are The Labor and Liberal Parties Fighting About Negative Gearing? 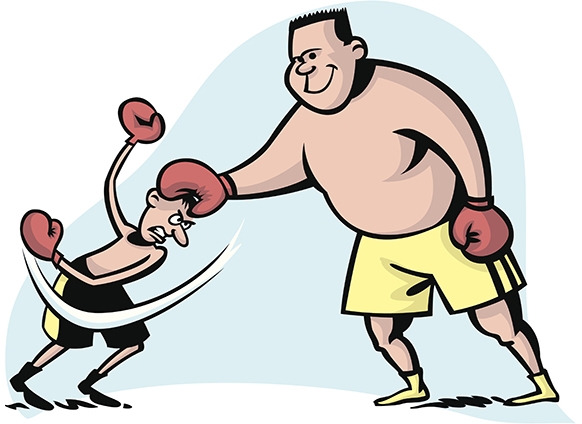 Will Proposed Changes by Government Bring a Huge Shock to the Australian Property Market?

Negative gearing, a measure that allows people to offset income losses relating to a business, stocks or property against their personal taxable income, has suddenly become a hotly contentious issue between the Liberal and the Labor parties. This effectively ends a decades-long bipartisan agreement that is likely to become a key policy for both parties going into the election.

What the Labor party has taken issue with, specifically, is how negative gearing relates to property. In the last year, property prices increased 11 percent, while incomes only grew 2 percent; the median price for a detached house in Sydney topped $1 million. This, Labor argues is the result of negative gearing and the introduction of the CGT discount in 1999.

Thus, Labor wants to limit negative gearing to the purchase of newly built housing only and reduce the CGT discount from 50 percent to 25 percent, reforms that Prime Minister Malcolm Turnbull says will reduce the number buyers for residential property by 30 percent. “It’s designed to lower the value of Australian homes,” Mr Turnbull said. “It will be a very serious, negative shock to the market.”

It seems, though, that halting the rising cost of housing is precisely what the Labor party is aiming to do — although Labor’s policy wouldn’t apply retroactively, as only investments made after July 1, 2017 would be affected. Whether or not Labor’s policy would actually help to make housing more affordable by reducing the number of investors buying established homes or not, is a point of contention between both parties.

How Did Housing Fare When Negative Gearing was Quarantined Last Time?

In 1985 and until 1987, the Hawke Labor Government abolished negative gearing for all future rental property investors — meaning, existing investors would not be affected. The purpose was not strictly to make housing more affordable — i.e. reduce the cost of housing in Australia’s major cities — but to prevent a housing bubble, which the then-Government felt was likely to occur.

One of the Turnbull Government’s main arguments is that changes to negative gearing will see fewer buyers in the market. When they say buyers, they really mean investors, since they’re the buyers who would be directly affected by changes to negative gearing. With fewer investors in the market, the argument goes, there will be fewer rental properties available, creating more demand and pushing up rents.

Time and again, the Liberal party refers to the 1987 Hawke Government’s decision to reinstate negative gearing, claiming that the escalating rents and unaffordable housing, which directly resulted from abolishing negative gearing led the Government to reverse their decision. But, did rents really rise out of control in the middle 1980s?

To properly determined how rents changed between 1985 and 1987, you need to remove inflation, which is the general increase in prices and fall in the purchasing value of money that occurs over time. If you leave inflation in the price doesn’t allow you to determine what increases were due to inflation or not. The graph below shows how the rate of inflation in Australia during the period 1985 to 1989. 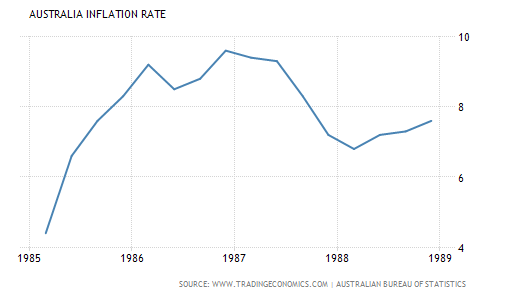 As you can see, inflation rose steadily from 1985 onwards, peaking at almost 10 percent in early 1987 before settling at a rate of just under 8 percent in the back end of 1987 onwards. When you remove inflation from rental prices, you get what is called the ‘real’ rental price, shown below over the same period as above. 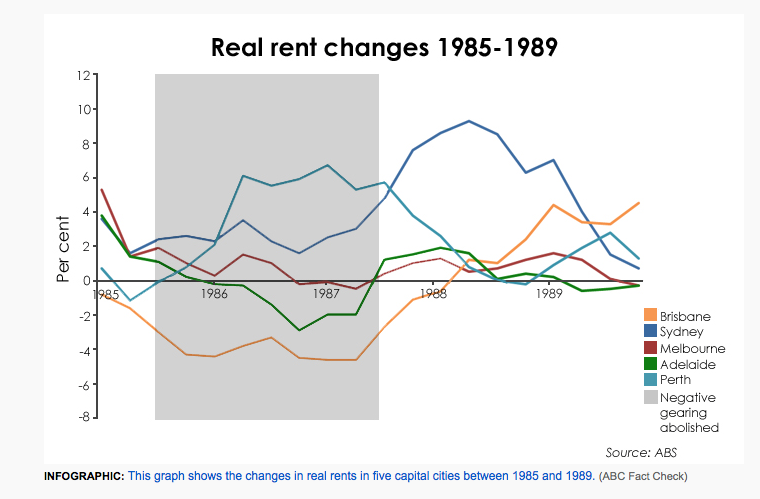 At this point, it’s wise to cast your mind back — if you’re old enough — to Australia in the mid 1980s. Interest rates were at 15 percent (the RBA would continue to raise interest rates to a high of 18 percent in 1990, before Australia entered a recession), while the stock market was performing well — the All Ordinaries Index rose 223 percent between 1984 and 1987.

This indicates that investing in the property market was already out of favour long before negative gearing was abolished (possibly due to high interest rates), while typical owner-buyers were discouraged from entering the market, preferring to rent instead, until interest rates lowered. If you look at vacancy rates among rental properties over the same period again, it shows that vacancy rates remained stable in Adelaide and Melbourne, while Brisbane’s vacancy rates increased, and Sydney and Perth’s vacancy rates fell sharply. 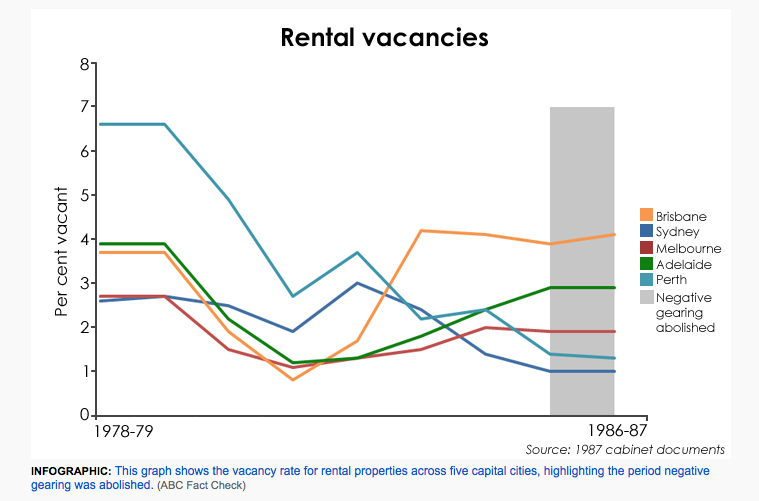 Clearly, negative gearing wasn’t solely to blame for the growth in Sydney and Perth’s rental prices. That growth was mostly being driven by low vacancy rates — or a lack of rental stock — which, in Sydney, had been a consistent problem since the late 1970s (and one that remains today), while rental stock fell rapidly in Perth in the early 1980s and continued that trend right through the decade (and into the 1990s and beyond, once the mining boom took off).

At this point, the single greatest challenge to solving Australia’s housing crisis is that the demand for housing in our major cities, particularly those closest to central business districts, consistently outpaces supply. Changes to negative gearing may go some way to reducing the upward trend of property prices — or, at least, with respect to already established properties anyway — but not by any significant amount.

Meanwhile, the Liberal Government’s claim that changes to negative gearing will reduce the number of buyers in the market by 30 percent, should be amended to specifically name check investors who use negative gearing.

The entire point of the changes to negative gearing is to reduce the number of investors buying established properties in areas of high demand, such as those nearest to CBDs, enabling more owner-occupiers to enter the market instead.

Does this mean a property prices will be reduced? Possibly, but the people most affected would be investors intending to buy and negatively gear property. Investors buying property that will generate a positive return on their investment will remain unaffected, just as homeowners selling their primary residences with the intention to buy and reside in another will also remain unaffected.

Despite the Liberal Government’s staunch opposition to Labor’s proposed changes to negative gearing, they’re yet to unveil their own policy to help solve the housing affordability crisis. In the meantime, though, it seems that the next election is gearing up to be a negatively charged one. You can read more insights and analysis on Australia’s housing market at our blog.

Alternatively, subscribe to our website to receive access to our free educational guide, What You Really Need to Know about Selling Your Property, which covers each step in the real estate sales process — from selecting a suitable sales agent to navigating the conveyancing and settlement stage.