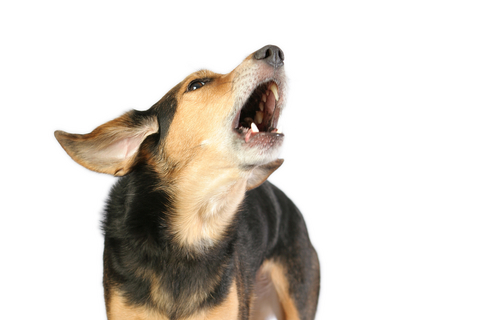 In our comprehensive guide, Selling Your Property: What You Really Need to Know, we point out how crucial marketing is to the property sales process. In fact, it’s almost as crucial as selecting a real estate agent.

It’s no exaggeration when we say that marketing costs are next in line only to the cost of your real estate agent’s fees and commissions. Yet, despite this, marketing is usually the area that is least understood by vendors who either limit their expenditure completely or spend far too much.

Research shows that every vendor should expect to spend at least one percent of the market value of their home on marketing costs. And since the largest chunk of that pie is tied up in advertising, researching your advertising options is a good place to start.

In this two-part blog series, we take a look at online advertising when selling your home and delve into the two market-leading property websites, Domain and RealEstate.com.au. We explore both websites (which are currently engaged in a court battle over who has the right to say theirs’ is the Number One property app in the country) to determine whether either company can truly claim the distinction of being Australia’s foremost real estate source.

If you happened to read The Sydney Morning Herald or The Age newspapers on 11 February 2016, then you would probably be under the impression that Domain, the property website operated by Domain Group, a subsidiary of Fairfax Media (also the publishers of those aforementioned newspapers) had the Number One property app in the country, thanks to two advertisements that appeared in both newspapers.

The company had planned a campaign of advertisements to run in both their Sydney and Melbourne newspapers for a period of weeks, but a court injunction, sought by REA Group, a New Corporation subsidiary and the owners of rival property website Realestate.com.au, prevented them from doing so until another court case, scheduled for March 7, determines which company actually does have the Number One property app in the country.

This kind of legal stoush between the two largest newspaper publishers in this country is common. Real estate advertising remains one of the largest sources of revenue (40 percent of revenue in News Corporation’s community newspaper titles is derived from display advertising in their print real estate editions alone), so it’s an operational imperative for both companies to maintain, if not increase, their market share in the real estate market, even if that means taking some of the largest companies in the world to court over it.

But Domain Group countered that claim, arguing that REA Group’s metric wasn’t a good measure of the app’s popularity because it counts historical data, where Domain believes that recent uses of the app provides a better measure of popularity. Domain claims its app had more users than the realestate.com.au app between July and December 2015 — figures which are also in dispute by REA Group.

So who’s a vendor to believe?

To begin with, it’s quite possible that both companies are correct. Although, since Domain hasn’t presented their figures in court yet, we don’t know what they’re basing their claims on. That said, it’s pretty unlikely that Domain has fabricated their figures, so it’s probably safe to assume that they’re relying on some accurate data set to substantiate their claim.

To understand how it’s possible for both companies to claim they have the number-one property app in Australia — and to each have the research backing up that claim — it helps to take a look at exactly what each company is claiming.

This is why it pays to do your own research, rather than to rely solely on the claims made by a company about its product. If a company says it has the Number One property app in Australia or Sydney or Melbourne or wherever, rather than believing that claim, find out the data behind it.

Cut through the spin by analysing the data

In REA Group’s case, find out about that 4.8 million downloads. Right off the bat, that looks a lot better than 4.2 million downloads. But think a little bit about what a download is. It’s the number of times someone has installed an app on one of their devices — today that could mean a mobile, tablet or watch.

The problem, then, with talking about downloads is that, most people have more than one device. Suppose every household has three devices, each with a particular app downloaded on them, the number of households that app reaches is about a third of the number downloads.

It may be true that realestate.com.au was the most downloaded app in the period to October 2015, but there are plenty of people who download apps and then never use them. So a company using data derived from an app marketplace like Apple’s App Store is not a reliable way to determine an app’s usage.

How many people are really using property apps?

The numbers were nowhere near REA Group’s 4.8 and 4.2 million downloads claim, but they were also not quite as conservative as our estimate, either (though as more people adopt wearable devices, like smartwatches, that is likely to change).

As of the final quarter of 2015, 1.9 million Australians aged 14+ had downloaded the realestate.com.au app on one or more devices, while 1.2 million have downloaded the Domain app. Those figures represent total downloads since the apps first became available. Unless Domain went to market significantly later than realestate.com.au did with their property app, then it looks like REA Group may come out as the ‘number-one property app’ victor. 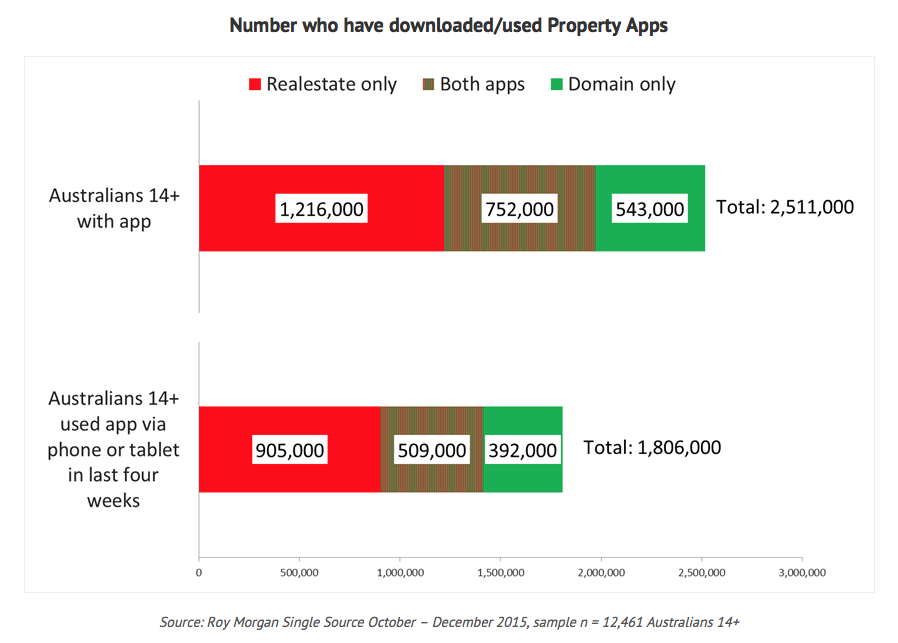 People who have downloaded property apps.

But what about desktop numbers?

Currently, the way apps function, though great for the user, they’re not that helpful for the advertiser, because there’s no way to tell how many people viewing an advertisement via an app are actually returning from the website or vice versa.

Again, by looking at the total digital media audience measurements collected by Roy Morgan Research, you’ll see that, as of December 2014, when these figures were last counted, REA Group was the market leader, with a combined digital audience of 3.5 million, compared with Domain’s 1.7 million.

What this tells vendors is that, in an era of fragmenting media audiences, you can no longer look at the efficiency of one medium, advertise there, and call it a day. You need to really consider advertising and marketing your property holistically, by looking at multiple mediums for the most efficient option for your property. You should do this in consultation with your real estate agent, who’s still the most skilled person to tell you about the kinds of buyers you’re looking for.

To learn more about selling property, subscribe to our website to receive a free download of our educational guide, Selling Your Home: What You Really Need to Know. Don’t forget to check back here for Part Two of “Who’s Top Dog in Property Advertising?” which, in keeping with our holistic approach to property advertising, looks at the print and online advertising combination.